A few of my favourite Glasgow images photographed at evening twilight including six of my latest images shot in 2016.
For many more images taken around Glasgow, please see my Cityscape Nightshot Gallery

A few of my very latest photographs taken from around Glasgow.
The first image on display is of course the beautiful Kelvingrove Art Gallery and Museum building lit up at night. I took this image after some rainfall which produced some interesting reflections and combined with the long exposure gives a kind of glossy sheen to the overall image, which I like.

The next image is of course the Clyde Arc Bridge lit up just at evening twilight. I have taken many shots of this bridge as shown in my Night-shots gallery , but what I love particularly with this shot and the 5th one below is, it is the first in the series I have taken with the bridge displaying a kaleidoscope of colours, just like a rainbow, and also the wonderfully rendered diffraction spikes  (Sun-stars)  from the street lights on the bridge, thanks to my Canon’s 16-35mm f4.0 IS L  9 diaphragm blades, which produces beautiful 18 point spikes.

The two Red Pontiac 1950 classic car images below were completely unexpected as I had been photographing the rear of the Glasgow Riverside Museum in frequent showers, I had decided to leave and go home, but as I walked around the front of the building I noticed this beautiful classic car sitting outside the building, which needed to be photographed as it looked striking against the dark sky while being lit up with the soft lighting from the building and street lights. The showers also helped make the shots  more atmospheric and produced light reflections on the rain soaked ground. The last shot I took of this car (3rd image below)  was in the pouring rain, fortunately I had an umbrella with me to cover my equipment for the duration of the 60 second exposure.

Evening twilight by the River Clyde revealed these perfect reflections of the Glasgow Clyde Arc Bridge.

This photograph was taken at the Lancefield Quay side of the River Clyde which has undergone some development to extend the ncr75  walkway, which allows this unique and splendid view of the Clyde Arc bridge to be photographed. I took various shots of the bridge from this viewpoint from landscape to portrait orientation while the evening twilight was descending, and the reflections remained absolutely still and crystal clear for the duration I was there.  This square crop of the bridge is my favorite as it shows not least of all the stunning detail of the reflection and the blue hour twilight just before darkness fell.

If you would like to purchase this image as a high quality print or canvas, please click here for print options 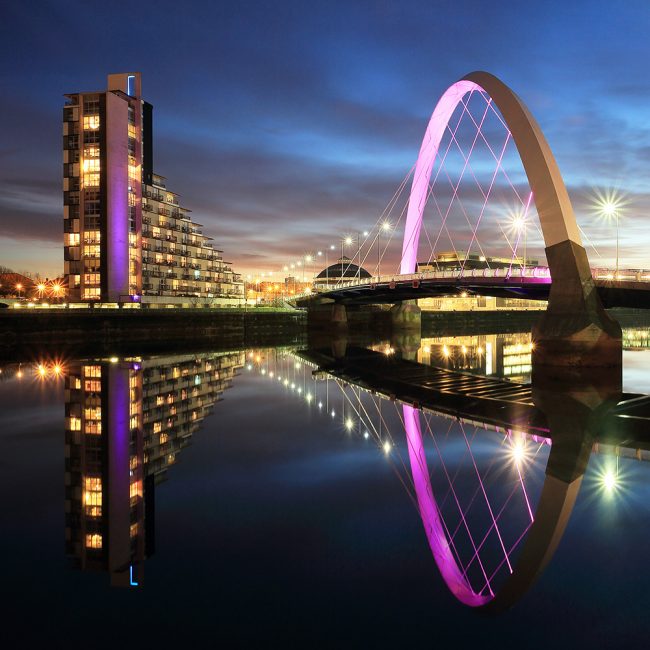